Sheffield shows up in strength at Sanctuary Summit 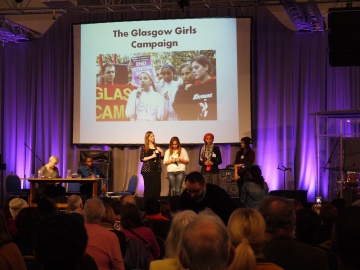 Sheffield organisations were well represented at the first ever Sanctuary Summit held in Birmingham last Saturday. At least 10 local people representing seven different local groups joined 400 others from all over Britain to express their solidarity with migrants and refugees. The Archbishop of York, the Rt Rev Dr John Sentamu sent a message of support and the Chief Executive of the Refugee Council Maurice Wren urged participants to “reclaim the centre ground of political debate with empathy, compassion and common sense”. One of the highlights of the day was an appearance by the so-called “Glasgow Girls”, four women(pictured) who shot to fame as schoolgirls when they saved their asylum-seeking friend from deportation. The summit ended with a vote of support for the “Birmingham Declaration“ – a set of principles and aspirations to which organisations around the country are invited to sign.