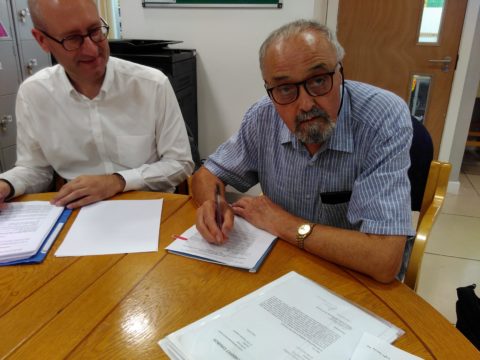 We are deeply saddened to report the death of Mike Reynolds, our former Chair who helped bring this movement into being and was instrumental in securing and developing our work at The Sanctuary.

A devout Roman Catholic, politician, academic and passionate advocate for human rights, Mike was involved with City of Sanctuary (COSS) from its inception. As Chair his limitless enthusiasm combined with meticulous attention to detail culminated with his signing the lease for The Sanctuary on Chapel Walk, one of his proudest achievements. He applied the same care & compassion in his support for COSS staff, and in his volunteering to help individuals caught up in the asylum system with our sister charity ASSIST.

After studying languages at Durham Mike worked in Venezuela, Saudi Arabia and Spain. Returning to the UK he eventually settled in Sheffield, working as a lecturer in Applied Linguistics and immersing himself in Liberal Democrat politics. Mike’s commitment to justice and human rights guided his work as a City Councillor, with Church Action Against Poverty and the Fair Trade movement – while still finding time to sing with the Sheffield Philharmonic Choir and his other passions for walking and reading.

Mike was diagnosed with cancer the week of his twin brother’s funeral and during his last 18 months continued to enjoy lively debate over a glass of wine and good meal with his many friends. He adored the company of his two grandchildren and died just short of his 80th birthday, with his wife Marian, daughters Rachel and Anna and sister Teresa beside him.